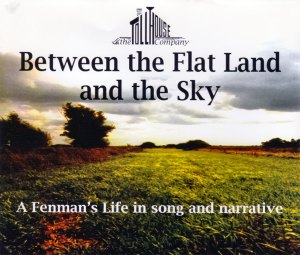 Between the Flat Land and the Sky

John started working on 'Between the Flat Land and the Sky', a musical theatre production aimed at a more mature audience, in 1988 and later in 1993 the narration and incidental music were added. It was not until 1996 that the final song was written.
The company toured the production around village halls in East Anglia with some backing from Arts Development in East Cambridgeshire (ADeC) and Vaughan Moll guesting as Walter, the narrator.

Between the Flat Land and the Sky is Walter's story:
Fifty years on the land beneath the great Fenland sky ­ a way of life fractured by war and threatened by change.
Walter is one of the last manual workers to make his living from the flat black fenland soil. Now he has retired.
Sitting alone in his front parlour; his regimental photograph on the mantlepiece, an album of snaps and a bottle of wine at his elbow, Walter reminisces - work, war, friends, lust, love, struggle, change and the misty impassive fen.
He remembers how it all was - how it will never be again . . .